For the second year a Striders team headed up the range to Toowoomba to participate in the Toowoomba Road Runners 10km, Half and Marathon. Last year was a successful year with me taking out the marathon, and the pressure was on to retain the title. We also had a few contenders for the 10km and Half race amongst our women.

We split into two cars and headed up the range on Saturday afternoon, and stayed a caravan park close to the race start at the university. Last year Gabe handed out ear plugs to those sharing his cabin so I made sure I got up there in the first car and organised the cabin allocations so that Gabe would be placed with some other poor unsuspecting coots. We had one female cabin and two male cabins.
We gathered at La Porchetta’s Italian restaurant for a thoroughly enjoyable carbo loading feast late afternoon, and then gathered in one of the cabins to talk race tactics, dreams, hopes and fears. We agreed that what was said on the weekend stayed on the weekend but I would love to divulge some of what emerged from our discussions! 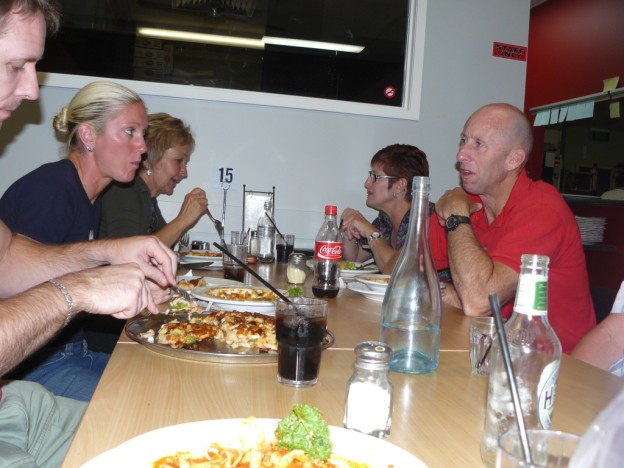 We all rose early on Sunday morning and got ready for the big day. I arranged my own water bottles for each drink station so that I could grab and go. Some of these bottles (although clearly marked) were stolen by the Half and 10km runners but it worked out OK for me.

The Marathon
The marathon started at 6am and I was the only Strider in the field. The pace was fast and a group of 5 runners formed early in the first lap and we were running about 2 minutes ahead of schedule for a 3:  marathon. I backed off the lead pack a little and brought my pace down to about a minute ahead of schedule.
Going through the halfway was a buzz with Striders in full voice led by Jerrod a.k.a. J-Dawg hollerin and hootin’ like he was on LSD!
The first three laps were run pretty much to the second on schedule for my pacing. By the time the third lap started the lead runner had moved well beyond reach. By the start of the 4th lap the 2 & 3rd place runners had moved away from me by a long way. The 4th lap was a hard one, but made  a lot better by the constant mobile support of J-Dawg and Ernie who were following me by car, playing a selection of classic 80’s rock and waking up the neighborhood. The strains of ‘Eye of the Tiger’ could be heard a long way off.

West street is a long 4km stretch and on the 4th lap you just don’t think it’s going to end until it hits the ocean at Perth! I came home to a warm welcome from fellow clubbies, taking 4 minutes off my 2008 time but this year only in 4th place for a 3:04, to pick up the age group award. There’s not much more you can ask of the body I guess, 2008 was just my year I guess!

Half Marathon
Our biggest number of entrants was in the Half. Greg Hall (Greg Dog) was our first Strider home in 1:34, followed by Michael Stark in 1:41, Gabe Petrie in 1:44 and Wendy Clark taking 4th position in the women’s with 1:45 (see below).

Sandy Scott ran in on 2:00 hours to take age group honours, although this was not acknowledged in the awards ceremony, so we’ll do it here: well done Sandy! 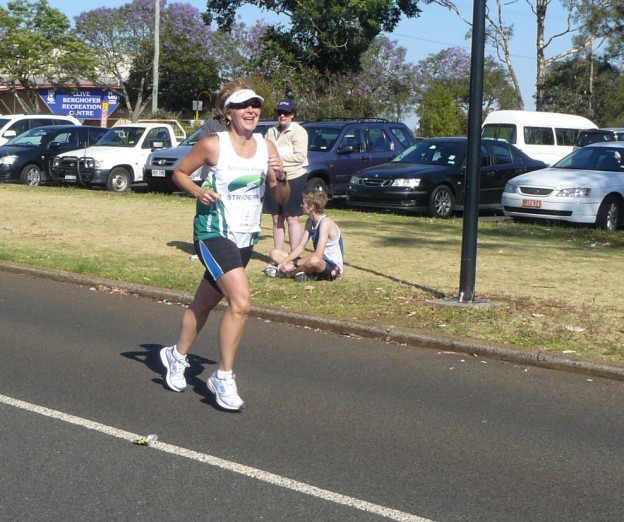 Post Marathon Feed
We moved on after a shower and the awards ceremony to Sizzler for the second year in a row for a satisfying feed. By the time dessert came around a competition developed between two Striders, on male one female. We will protect the identity of the female competitor, but here is her dessert followed by J-Dawg’s: (yes those are dinner plates by the way!)

J-Dawg ran out the winner (only just), by taking a no holds barred approach to finishing his plate: 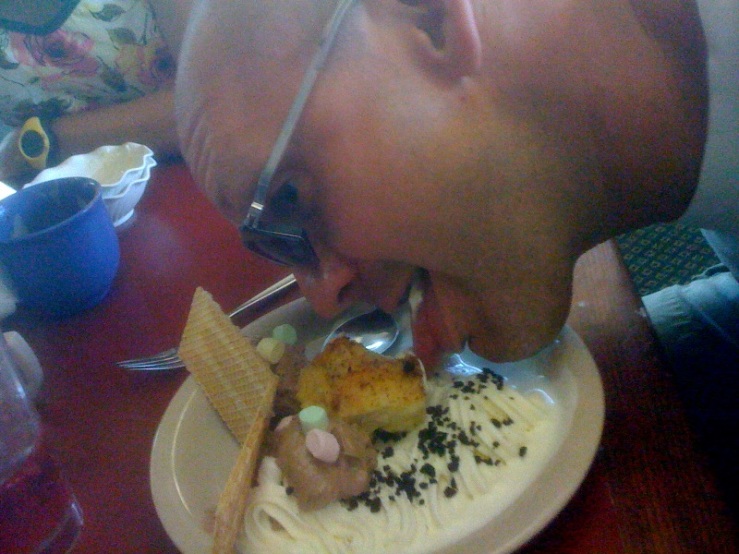 The ride home was loads of fun as well (for those who stayed awake!)

A big thank you to Andrea for her support through adminstration and on the day.  She made a big difference to our trip by making sure everything was well organised.  Thanks to Jonas as well for his support.  The Toowoomba Road Runners are an excellent club, and well served by the many people who helped make the day possible.  I certainly tried to thank every marshall at a water station or turn for helping to make the race possible.  Racing can’t happen without willing helpers and we appreciate you very much. Thanks to the runners who went up and congratulations to everyone, you performed so well on a tough course!

We plan on going every year now and making this a carved in stone annual event.  It’s a great 24 hours away.  We fit in a lot, and it’s all a good time with lots of laughter. Remember to reserve this weekend in late October next year and don’t miss out on the fun!

View all posts by SPStriders